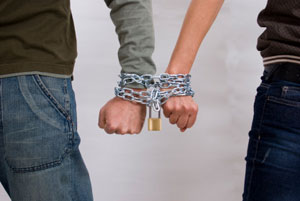 Codependency, also referred to as relationship addiction, is both an emotional and behavioral condition passed down the generation line and affects a person's ability to have a mutually satisfying and healthy relationship. Following a number of studies conducted on interpersonal relationships and alcoholism within families, codependency was discovered. Being a learned behavior, codependency is passed on from one family member to another through watching and imitating those members who display the behavior.

The condition can potentially affect any person whose friend or close relative suffers from alcoholism or drug dependency. This includes parents, co-workers, spouses, siblings, and many others; hence the need to find a therapist for codependency when suspected.

The Role of a Dysfunctional Family in Codependency

By definition, a dysfunctional family is one whose members suffer from pain, anger, fear, or shame which is often denied or ignored. Among the greatest contributors to dysfunctional families are an addiction to drugs, gambling, or work; emotional, physical or sexual abuse, and the presence of a sibling or parent suffering from physical or chronic mental illness.

Normally, dysfunctional families live in denial and don't disclose what they are going through. This, in turn, represses their emotions and causes them to ignore their personal needs. They detach themselves from others, avoid difficult emotions, and develop mistrust. The emotional development and identity of the family members become inhibited.

Most energy and attention is focused on the affected family member and this causes the rest to sacrifice their own needs hence losing contact with their own desires and sense of self-worth.

Inasmuch as codependency shares signs and symptoms with other conditions, there are some outstanding signals that point towards this disorder. Amongst them are:

Low self-esteem – Co-dependent people constantly look out for external support and approval because they find it extremely difficult to believe in themselves. Some of them believe in drugs and alcoholism as the panacea to their low esteems.

Compulsive care and protection – From the outset, co-dependents may look like people who have good intentions because they take care of others who are facing difficulties. However, upon a closer examination, this caretaking is driven by self-defeating objectives and martyrdom on the part of the caretaker. By covering up for the affected member, the problem deteriorates causing them to become even more dependent.

Other pointers to codependency include an overrated sense of responsibility, a tendency to feel hurt when your efforts are not recognized, unhealthy dependency on relationships, and fear of abandonment, mistrust in self and others, rigidity to change, dishonesty, and poor communication.

Codependency is addressed through therapy where the specialist digs into the childhood of the affected person and explores issues and relationships which may have been distractive and unhealthy. Therapy allows the co-dependents to identify self-defeating habits and rediscover themselves. Since these people have a problem opening up, online therapy can help greatly in addressing cases of codependency because it allows for more privacy and confidentiality.

Online therapists are well trained and experienced in helping individuals to link with their past feelings in a bid to reconstruct family dynamics. This opens up their hidden world and gives them the opportunity to experience their full range of feelings once more.

When positively identified, codependency can be addressed comprehensively. This is why the Virtual Therapist Network has invested time and effort in bringing together high caliber online therapists for codependency.